Suhrawardi’s logic of the Hikmat al-Ishraq is basically modal. So to understand his modal logic one first has to know the non-modal part upon which his modal logic is built. In my previous paper ‘Suhrawardi on Syllogisms’(3) I discussed the former in detail. The present paper is an exposition of his treatment of modal syllogisms. On the basis of some reasonable existential presuppositions and a number of controversial metaphysical theses, and also by confining his theory to alethic modality, Suhrawardi makes his modal syllogism simple in a way that is without precedent

What makes Suhrawardi’s logic markedly different from that of the Peripatetic logicians is his theory of modal syllogisms. Compared with Ibn Sina and his followers, Suhrawardi makes the subject extremely simple. And that is because:

i.)          He Makes modality a part of the predicate and confines his modality only to the alethic ones i.e., necessity and possibility. So he writes:

And he maintains that:

“By ‘necessary’, we mean only that which‘is’ by virtue of its own essence. That which necessarily ‘is’ on condition of a time or a state, on the other hand, is contingent [possible] in itself.”

in which ‘Mod’ stands for ‘necessity’ or ‘possibility’ becomes:

The second innovation is the main reason for the simplicity of his modal theory. To see why, let us examine an interesting and controversial example in the Peripatetic tradition:

This is a  first figure modal BARBARA  syllogism that Farabi and IbnSina argue for its validity, but among Muslim logicians perhaps it is Khunaji who for the first time rejects it, and depending on two different interpretations, he regards it either as invalid or as not known to be productive or sterile(2,xl-xliv.p.270-281).

For Suhrawardi such controversy over this syllogism has no significance. This is because for him this syllogism is ill-formed for the simple reason that in it the middle term which according to (ii) is ‘¸Gx’ is not repeated. So it is not a syllogism proper. For him the right form of the syllogism would be:

But as we shall see Suhrawardi’s insistence on the recurrence of the middle term leads to an inconsistency in his second figure modal syllogisms.

I shall come back to the disputed syllogism soon and show how its validity can be proven in Suhrawardi’s logic.

But let us first examine his modal syllogisms of the first figure.

As I have shown (3) Suhrawardi reduces all non-modal moods of the first figure to:

Now by (i)-(iii)afore-mentioned, in the modal cases that single mood becomes:

‘Mod’by (ii) can be either ‘£’ in the ‘ModGx’ or ‘¸’ and in each of these two cases the’Mod’ of’‘Hx’ can be ‘£’ or ‘¸’. Given that the ‘Mod’ of ‘H’ in the major premise and the conclusion should be the same we have four modal moods altogether The validity of these moods, all in BARBARA, is obvious. Suhrawardi gives the following examples:

1-Necessarily every human being is a possible writer

\Necessarily every human being is necessarily animal

2-Necessarily every human being is a possible writer

Necessarily every possible writer is a possible walker

\Necessarily every human being is a possible walker

It is worth mentioning that formally in each of the moods of this figure the subject of the minor premise may also be modalized and this would double the number of syllogisms.

Before going to the second figure let us see how the so-called ill-formed syllogism mentioned earlier can be converted to the Suhrawardian form of it and then show its validity after all. Here is the proof in the quantified modal logic S5 with which I assume the reader’s familiarity.

If we accept Suhrawardi’s embedding the premises in the necessary modality, which I regard it as a metaphysical thesis, and apply it to the controversial modal syllogism, Suhrawardi’s derivation would become a shortcut proof. In fact Suhrawadi goes from the first line of the above derivation right to the line (6).

Here are the proofs of some other mixed syllogisms of the first figure found in Ibn Sina. For brevity I only mention those axioms used in some lines in the following proofs. It was Paul Thom who for the first time interpreted Ibn-Sina’s modal syllogistic somehow in the line with Suhrawardi by embedding Ibn-Sina’s premises of modal syllogisms within a necessity modality(4):

Suhrawardi’s single pattern for this figure is:

Here ‘Mod’ may be either ‘£’ in the both premises or ‘¸’. So we have only two modal syllogisms provided the subject of each premise is not modalized. Suhrawardi’s example is the following:

Necessarily every human being is a possible writer

Necessarily every stone is not a possible (is an impossible) writer

\Necessarily every human being is not a possible (is an impossible) stone.

Here in this syllogism we are faced with two problems.

2-      What is the justification for adding modality to the predicate of the conclusion?

As to the first problem, after mentioning the example quoted above he says:

So, in fact, he makes an exception to his rules for the predicates and consequently allows the change of the middle term in this mood.

Here Suhrawardi introduces two more rules. One rule  is logical and concerns the changing of the middle term from one of the premises to the other. The other rule is a metaphysical one, allowing  for the addition of the modality of necessity to the predicate of the conclusion.

In this figure too, the subject of the two premises can in theory also be modalized. Suhrawardi does not mention this possibility.

Interestingly there is a derivation of Suhrawardi’s common pattern for the second figure with the same modal conclusion without using his rule in quantified modal logic S5 which shows Suhravardi’s sound intuition behind his second rule for that figure. This is the rule Ibn-Sina also used for that figure before Suhravardi. Here is the derivation[1]:

Suhrawardi’s treatment of the third figure is even briefer than the first and the second and gives no modal example. But from what I said on his non modal cases (3, pp. 8-11) his single mood for this figure is:

Obviously in this mood according to whether ‘Mod’ in each of the premises represents possibility or necessity, we would have four modal moods. In these moods too we need the following additional necessary existential premise for each mood to get the modality de dicto for the conclusion:

So, all in all, we have the following four possible conclusions:

Some of these conclusions, namely the ones that are in the modality of necessity, can be simplified by elimination of that modality. The only conclusion that cannot be simplified and that has no counterpart in Ibn-Sina’s tradition is:

This ends my exposition of Suhrawardi’s modal syllogisms. I think that the following additional points are worth mentioning:

1- Given the semantics of modality in terms of possible worlds Suhrawardi’s making modality a part of the predicate of modal propositions can have two readings with different truth-conditions. For example‘¸Fa’, in particular where ‘a’ is a definite description, can be read as ‘¸(Fa)’ or ‘(¸F)(a)’. Now if we take ‘a’ as ‘The author of Hamlet’, then in the first reading and at the possible world w ‘The author of Hamlet’ refers to whoever at that possible world has this description whether Shakespeare or not. But in the second reading ‘F’ applies only to Shakespeare at w, if he exists in w at all. The question is how to read Suhrawardi’s de re modality. Now according to the second interpretation the proposition:

Every man is a possible writer

is to be symbolized as:

Here x refers to an actual man to whom writing as a possible natural capacity applies and Suhrawardi takes this application true , not only as a matter of fact, but also as a matter of necessity, so:

2- Suhrawardi’s rule for the second figure goes back to IbnSina. IbnSina maintains that in this figure the two subjects of each mood are essentially different, so it is not possible to predicate the major term to the minor.

Ibn-Sina by ‘not being ashamed’is referring to his disagreement with Aristotle’s view on this point in the Prior Analytics (7, 10-11) where he discusses the modal syllogisms. Ibn Sina also takes up this subject in more detail in his so far unpublished book on logic: Al-Mukhtasar al-Awsat (8, Manuscript, no.2763, p.54, Nour Uthmaniyah Library in Istanbul).

The theory of modal syllogisms in the Islamic logical tradition is a very complicated and controversial subject. But as we have seen, Suhrawardi gives a very simple version of the subject. He has done it by:

2-      turning modality and negation into parts of the predicate of modal propositions;

3-      reducing all moods of each figure to a single universal affirmative pattern;

4-      embedding all the premises of the syllogisms in the necessity modality;

5-      introducing for each of his second and third figure syllogisms only one rule for deduction and so dispensing with the rule of conversion and the other rules that are traditionally used for reducing the latter figures to the first;

Suhrawardi’s de dicto necessity reading of all premises and de re necessity rule for the second figure discussed above makes his theory committed to essentialism.

I would like to thank Professor Joep Lameer and Professor Paul Thom and Dr. Assadollah Fallahi for comments on the final version of this paper.

4-      P.Thom. "Logic and Metaphysics’ in Avicenna’s Modal Syllogistic", in S. Rahman, T.Street, and H.Tahiri(eds), The Unity of Science in the Arabic Tradition: Metaphysics, Logic and Epistemology and their Interactions (Dordrecht: Springer 2008),pp.361-76.

[1]- I would like to thank Dr. Assadollah Fallahi for bringing this point to my attention. 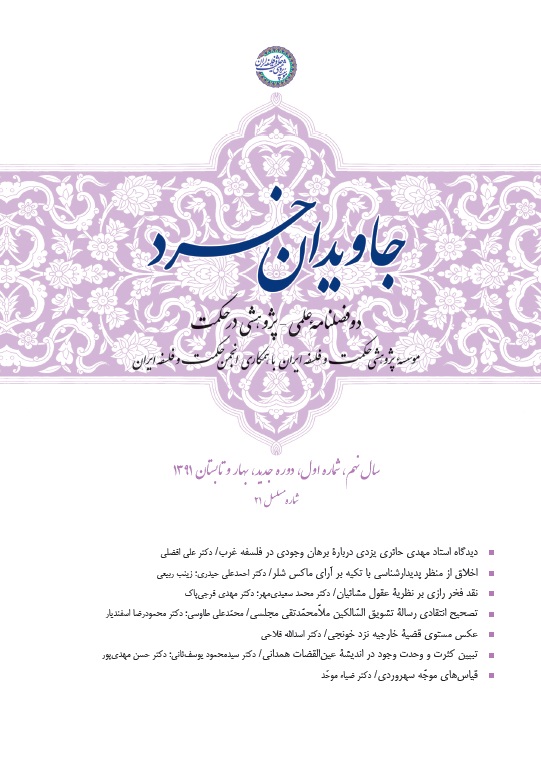