Analysis of the Meaning of Ethos in the Views of Heraclitus (Case Study: Fragment B119 Heraclitus)

Decoding the fundamental concepts of ancient Greek’s ontology has always been of interest to philosophers. The Greek way of thinking about the universe has established a relation to nature, objects, and even self-thinking through language, and in the experience of this relationship with objects philosophical thought  has formed, and from its heart new concepts emerged. Since Greek philosophy is closely linked to its ontology, it will not be possible to have knowledge of ancient Greek philosophy without a proper understanding of what these concepts are making.

One of these Greek ontological concepts is the word “ethos". The term “ethos" is derived from the Greek word "ἦθος, ἔθος, plurals: (ἤθη), (ἤθεα)" which has a close meaning to the spirit and the morality, and words such as "custom", "habit” just refer to a part of the meaning of the word. In the eighth to fifth centuries B.C., “ethos" was addressed as the way of life which was based on the will of the gods and it became a common attitude among artists. Accordingly they perfected their technical skills in presenting tangible personality and spiritual (ethos) moods and characters in the artworks. According to the analysis of the poems of archaic era, the commentators and scholars believe that “ethos" in Homer's poems first implied concepts such as "the place of habit" and most of all on the animal residence; the residence in which human has tried to train animals and impose his desired order and habits, contrary to their nature. However, contrary to human thought, the animal does not easily violate its nature or at least not be completely subjected to the imposition of order on itself. Later in the poems of poets such as Hesiod, Theognis and Pindar, ethos is interpreted from animal residence to "human residence," "habits," "customs," "deceptive nature" and "temperament”. In fact, according to these poets and writers, the way a human being adapts to the environment arising from his ethos depends on the habits and moods he shows from himself. Therefore, in the ancient Greek literature, ethos was construed as a quality of living, like habit which creates predictable behaviors.

In addition to literature, the word “ethos” has been used in the thoughts of Greek philosophers, including Heraclitus. The purpose of this descriptive-analytical study was to understand Heraclitus concept of ethos and for this purpose, the B119 fragment of Heraclitus along with its two key terms, "ethos" and "daimon", is analyzed. By analyzing this fragment, it became clear that Heraclitus had a deeper impression of daimon than the archaic literature, which is not the same as the Homerian goddess or the external force involved in human destiny. In Heraclitus' view, daimon is the highest level of human existence that man can be achieved it by knowing the principles of his own nature and the cosmos order. In addition to presenting a new impression of the human nature of the literature of the archaic era, Heraclitus offers both a fuller impression of the divine nature and the evolution of human nature over divine nature. Thus it becomes apparent that ethos and daimon have close links, and man, as a whole, enjoys the nature of God, and human is the focus of relevance and bond between Ethos, Daimon, Wisdom and Logos. According to Heraclitus, the difference between divine and human nature is in the absence of wisdom. From his point of view, man can never have the same ethos as divine Ethos, but only he has the ability to gain a degree of divine wisdom; because man has a spark of Deity. It is daimon who has the potential to gain wisdom, and the existence of demonic human is a prerequisite for gaining wisdom. Human nature obtains its reinforcement force only through its daimonian activity, but divine ethos is forever beyond man's reach. According to Heraclitus, the soul can be both dry and fiery but it is wiser when the spirit is at its driest or warmest; because it's more like its divine nature. In other words, when the spirit is dry, it has wisdom, a wisdom that is sovereign over everything and in this case more like logos or eternal fire; for the Fire of Eternity is sovereign over all things, and it descends upon all things, condemning and seizing them.

Therefore, a relationship can be established between ethos (human nature) and Daimon (divine nature) with Logos as a more inclusive cosmos- system than human intellect and wisdom. This means that in its highest form as a system, Logos has given a special intellect and wisdom to any being in accordance with his ontological rank. In this way, a degree can be assumed for the animal to be donated in part of the logos (Intellect and wisdom). That's why animals have minimal dignity of ethos and we can regulate its mood and habits through the manger. For man, as much as his acquired virtue, there are levels of Ethos and Logos from the animal stage to the divine constant. Therefore, it can be said that reason and wisdom are as a partial and underlying part of the cosmos-Logos-system, which regulates humans relationships with each other, man with nature and man with gods, and even the gods themselves are forced to follow this system with each other and in relation to human beings. As is evident in the teachings of Christianity, man is in the ranks of humanity, but through the gift given to human nature, he can ascend to the position of Deity. Therefore, in the philosophical system of Heraclitus, his words can be interpreted as such that despite the stark differences in the rank of ethos (human nature) and Daimon (divine nature) in adherence to reason and wisdom, it is possible that man rises to the highest stage in the world, but achieving the perfect divine nature is not possible. 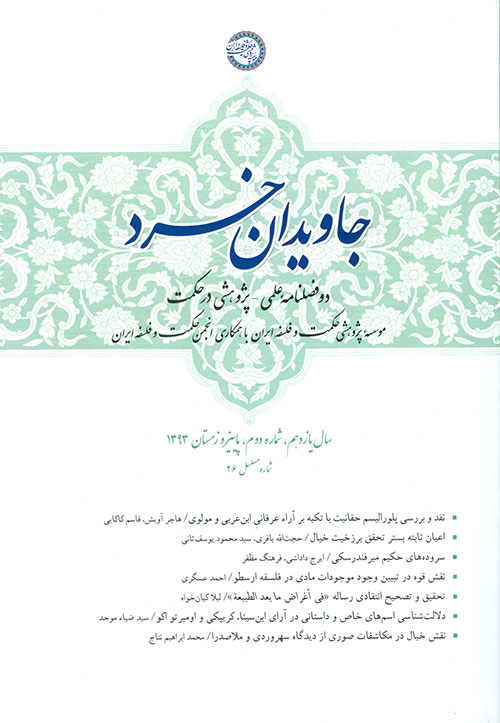